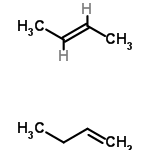 I’m introducing a new kind of posts called “The Science Behind it All’. I wanted to not only increase my knowledge about makeup in the superficial level, but to also understand what it’s made of. In these series, I will explore the scientific side of ingredients in cosmetics.

When I read the ingredients list for my Stila lip glaze set, I was shocked.  It’s full of tenes, and ates, and lenes, and all these scary chemcial compounds. Since polybutene is first on the list, I decided to do some research.

What is Polybutene?
-Scientifically: a polymer formed by the polymerization of a mixture of isobutenes and normal butenes. The viscosity of polybutene increases in direct proportion to increasing chain length.
-Normal language: it is a light colored, nondrying, sticky liquid derived from petroleum used as a plasticizer

What is it used in? It can be used in the formulation of lipstick, eye makeup and skin care products.

Why is it used? It functions as a binder and viscosity increasing agent. Pretty much it makes the liquids less runny!

Harmful? Does not cause any suspected health side effects! Considered safe for cosmetics use.

So it looks like this chemical isn’t bad at all for you. But of course it’s not good either. For those who likes to use natural makeup, maybe take a second look to see if the first ingredient is polybutene next time you buy lipgloss! I think this compound is what makes Stila lipglosses so sticky!

Here's my little Ugg collection! 🥾🥾🥾 (Not

Let's play a game! Are you a beauty expert? 🤓 C

Better days are coming, they are called Saturday a