After all the presents and shopping it’s that time of realization again. OH SHIT why do I have so much stuff! Here’s the items I’ve rounded up to finish in 2015! It seems like the inflow of products keep exceeding the outflow. AH!

You can see which items I wanted to use up last year here. You can also see my current progress here, but I will do an updated finalized one in the upcoming days. 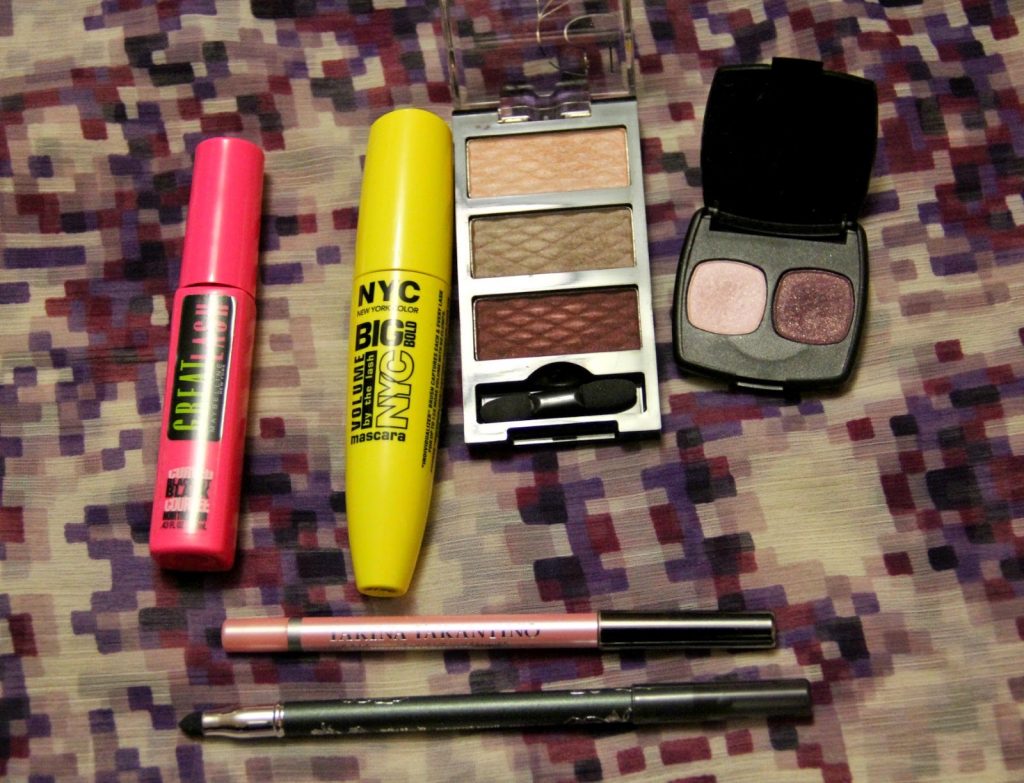 Maybelline Great Lash Mascara: I bought this earlier in 2014 and have used it a bit. I liked it at the beginning but not a super big fan of it anymore. See review here
NYC Big Bold Volume Mascara: I received this in August 2014 as part of the NYC Beauty Pro program but I don’t really like this one. It has the synthetic brushes which kind of scares me haha. I will just give it a couple more shots and see how I feel.
NYC HD Color Trio in Central Park Plum: I also received this through NYC in October 2014 so this is relatively new. The colors are beautiful and really easy to use for everyday.

Bare Minerals READY Eyeshadow 2.0 in the Inspiration: This mini duo is from the Beauty in Bloom set I got in April 2014. I’m not a huge fan of the colors but there’s only .5g of each so I’m going to try to use it up!

Tarina Taratino Eyeliner in Broken Doll: Finally an old product! I’ve had this since October 2012 and have loved it since! It’s harder to use up though because it’s a highlighting type of color.

Kat V Don Eyeliner in Proud Peacock: Bought this one December 2013 as part of my big haul. This color is quite unique and beautiful!

The Balm Hot Mama: I realized I stopped posting hauls this year but I bought this on Hautelook in July 2014. It’s a really beautiful shade but there’s 7g of product so I doubt I’ll even hit pan!!
Maybelline Dream Fresh BB: I looovee this! Bought it in June 2014 but it’s a bit dark for me right now. So hopefully in the summer I can use this up! Review here.
Benefit Hoola Bronzer: OLDIE ALERT! This was literally one of the first high end products I’ve ever owned. I bought this in December 2011 and think that I’ve used it quite a bit but there’s barely a dent! TYPICAL!
BareMinerals READY Blush in The One: This also came in the Beauty in Bloom set I got in April 2014. There’s 2g of product and it’s a relatively neutral shade so I’m hopeful.
LIPS 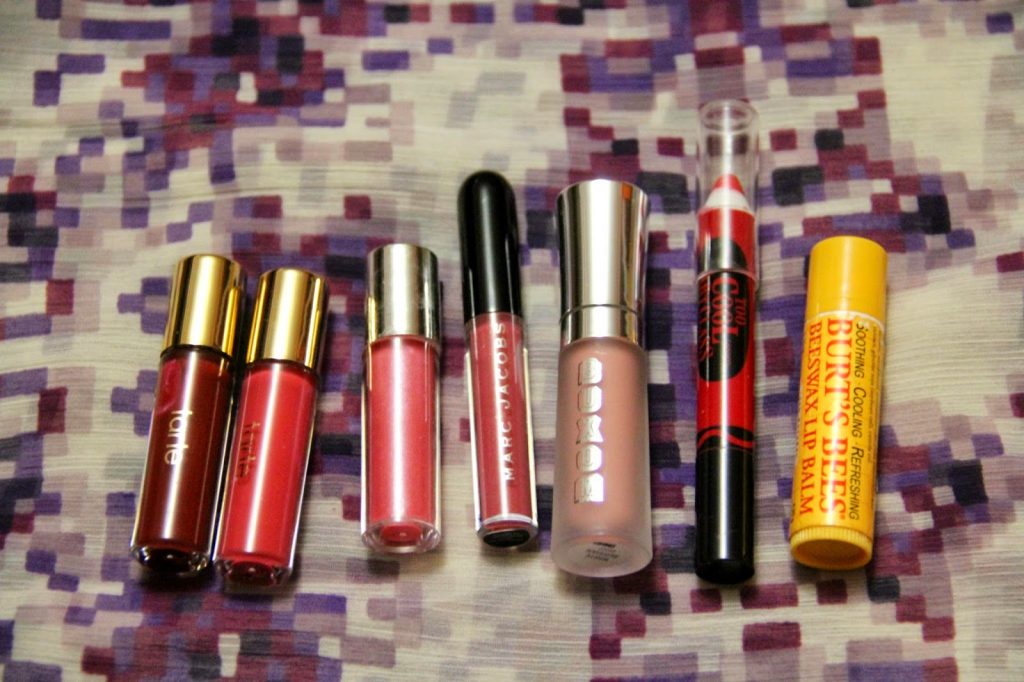 I won’t go into each in detail but the tarte ones are from December 2013. The Marc Jacobs and Buxom are from this year’s Sephora Got lips set.
The Too Cool for School lip pencil is from Asia so around fall 2013 and lastly the Burt’s Bees lipbalm which I love but haven’t been using it cause I don’t like my lips to tingle in the winter. HAHA is that weird?
I like all of these products and should be able to finish all with no problem! 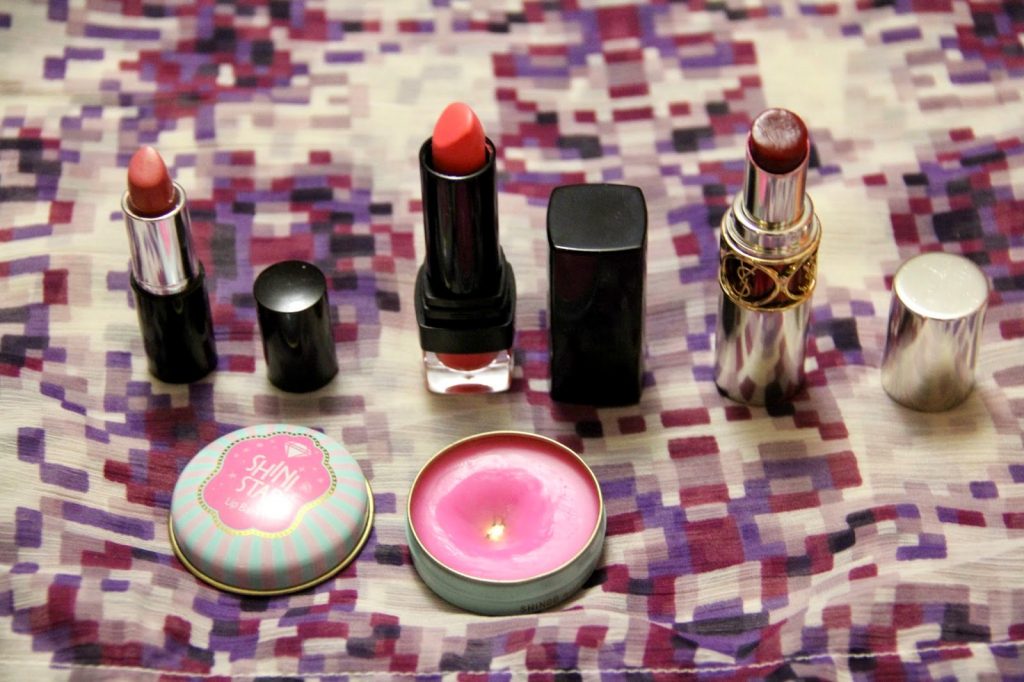 Bare Minerals Lipstick in Speak Your Mind: This came ALSO in the beauty in bloom set haha. It’s a really pretty mid toned pink.
One Direction Lipstick: The color looks so bright in the tube but it’s just a tint of color. It smells sweet as well! See review here.
YSL Rouge Volupte Shine in #5: I splurged on this in summer 2013 and it’s so beautiful!! I can’t believe I still haven’t blogged about it haha. But I definitely want to use this up before it goes bad!
Etude House Shini Stars Lipbalm: Got this in Asia so November 2013 ish. Love the way this smells but don’t like how I have to use my fingers.
PHEW! Thanks for sticking with me to the end. I noticed a lot of the products I picked are quite new so I might browse my collection and a couple of the older items in. I want to keep my makeup under 3 years old!
If you are doing something similar please link me so I can read it! And we can keep each other on track during the year 😉
Empties Roundup
by raincouverbeauty
Leave a Comment