I never realize when my mascaras start to pile up, but I recently went around grabbing mascaras from all corners of my life and I ended up with a huge pile I could never use up! In this post, I’ll give a brief review of all the mascaras that I currently have and then make a list of the best and worst mascaras I’ve ever tried! 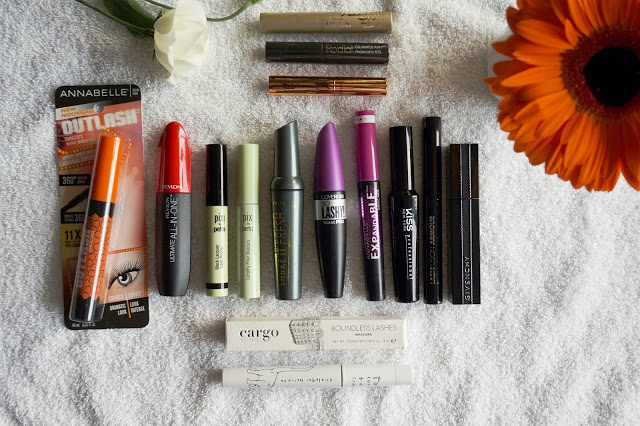 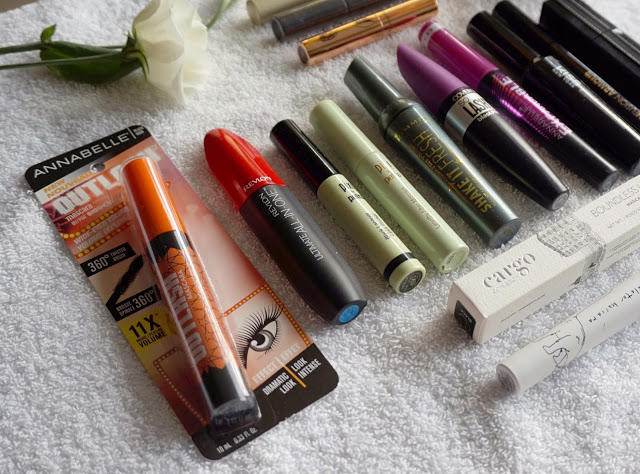 1) Annabelle Outlash
% Used: 0%
When I got it: August 2016
This is actually still brand new and I’ve gifted it to a friend! In the same collection, Annabelle also released a few other types that I have tried.

2) Revlon Ultimate All In One
% Used: 40%
When I got it: ?
The wand on this mascara is the weirdest I’ve seen with a tiny oval brush. But it surprisingly picks up all my lashes really well. I reviewed it before but it was in brown-black and it didn’t give as intense of a look. The one I currently have is in black and I like it a lot more! 4/5


3) Pixi Black Lacquer Lash Primer
% Used: 10%
When I got it: March 2017
Pixi is in Canada! This was one of the first items I tried, and unfortunately wasn’t that big of a fan. This primer was just as pigmented as a mascara but my lashes tended to clump when using this. 2/5

4) Pixi Lengthy Fiber Mascara
% Used: 10%
When I got it: March 2017
I haven’t tried many fiber mascaras before and the brush was very interesting. You can clearly see the fibers attaching to your lashes but it gave a very light feathery look but it didn’t hold up and lots of fibers fell throughout the day. 2/5


5) Rimmel Shake it Fresh
% Used: 5%
When I got it: June 2017
Very cool concept in this mascara in which you can shake to refresh the formula. However it is too wet at the beginning and it barely adds any volume to my lashes. 1/5 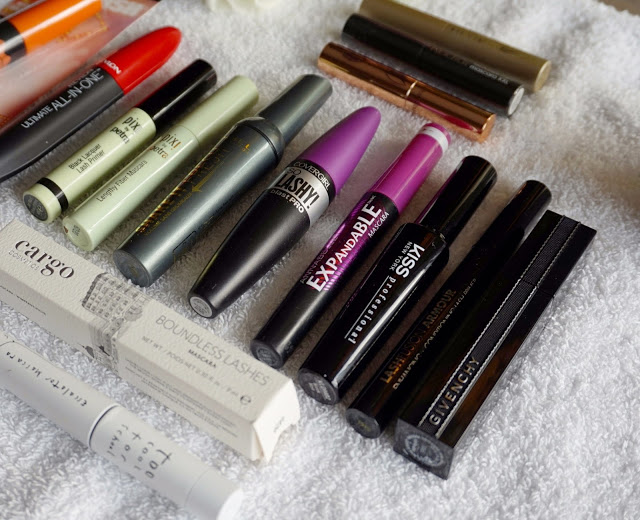 6) Covergirl So Lashy BlastPro
% Used: 5%
When I got it: August 2017
One of the newest mascaras I have in my collection, this did a decent job but nothing crazy to write  home about. I prefer the Total Tease mascara that also just came out (which I just realized didn’t make it to this photo) 3.5/5

7) Annabelle Expandable
% Used: 40%
When I got it: August 2016
This was one of the mascaras that Annabelle came out with in their huge mascara launch. This one has a twist in the cap that can change the size of the wand. I’m not sure if it does anything but either way it works pretty well! 4/5

9) Fusion Beauty Lash Armour
% Used: 5%
When I got it: July 2016
I only recently opened up this product as it is a primer and I wasn’t that interested in using primers. It surprisngly works just as well as a mascara on its own though. The formula is pigmented and the brush separates my lashes quite nicely! 4/5


10) Givenchy Noir Interdit
% Used: 10%
When I got it: August 2017
I received this mascara through an opportunity with the Canadian Beauty Bloggers group! It’s a really cool wand that bends 90 degrees. I find this really fans out my lashes and creates a layered effect but the brush is a bit pokey and I want bigger lashes. 4/5 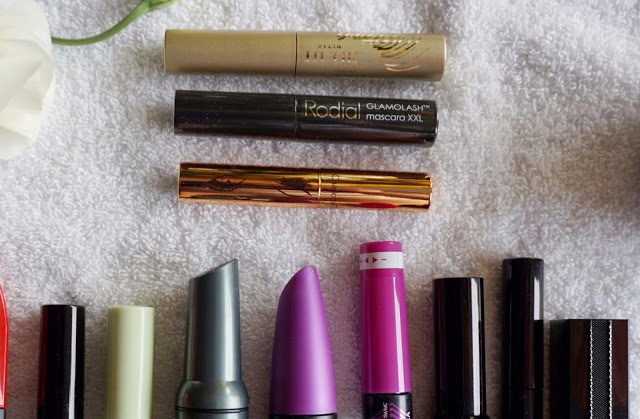 11) Stila Huge Extreme Mascara
% Used: 0%
When I got it: September 2017
I just received this in a samples bag from Murale (if you spend $125 you will receive a HUGE goodie bag worth $500+) But I’ve used the full size before and it’s one of my favorite mascaras ever!! It actually gives you such big lashes and it stays all day! 5/5

12) Rodial Glamolash
% Used: 0%
When I got it: September 2017
I also received this from the samples bag but I’ve never tried this before so I will open this up when I’ve used up a few other ones.

13) Charlotte Tilbury Legendary Lashes
% Used: 10%
When I got it: January 2017
This is a sample size and probably has the blackest pigmented I’ve tried! However, there’s too much product in the tube and I end up with a lot of clumping. Additionally, it’ is also so hard to take off as it is’s o pigmented and creamy. 2/5

14) Cargo Boundless Lashes
% Used: 0%
When I got it: July 2016
I never opened this as I had too many other mascaras open and I recently gave this away.

15) Too Cool for School Escalator
% Used: 50%
When I got it: February 2017
My boyfriend bought this for me when there was a K-Beauty pop up at Nordstrom. This mascara also twists to change the brush length. I find this mascara really good at holding a curl so it’s perfect for Asian lashes! 4/5

After doing this, I decluttered quite a few of my mascaras. So the only ones I kept are Fusion Beauty Lash Armour, Givenchy Nori Interdit, Too Cool for School Escalator, Charlotte Tilbury Legendary Lashes and Covergirl Total Tease which is not pictured. I’ve kept the Stila and Rodial samples unopened for now and I’ll probably taken them with me on vacation later this year!

I’ve decided to compile a list of my favorite mascaras that I’ve ever tried. I based this on whether I can get big dramatic lashes, whether it is able to separate my lashes, how well it stays on all day, and if it’s easy to remove. 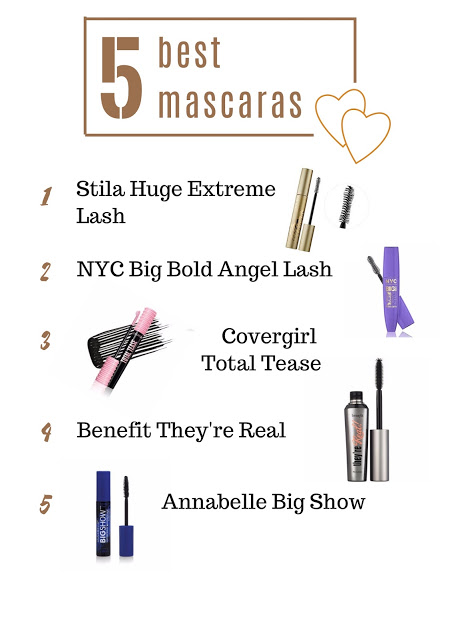 Throughout my time I’ve also had a few of my least favorite mascaras. My most notable ones are the Rimmel Shake it Fresh, Too Faced Better than Sex Mascara and Tarte Lights Camera Lashes.

It feels so good to finally clean through my mascara collection. I’m planning on doing a similar format for foundations next month! Let me know what are your favorite and least favorite mascaras!

Are you a Charlotte Tilbury fan? 💕 Their matte

It's peak shopping season and I'm sharing a few of