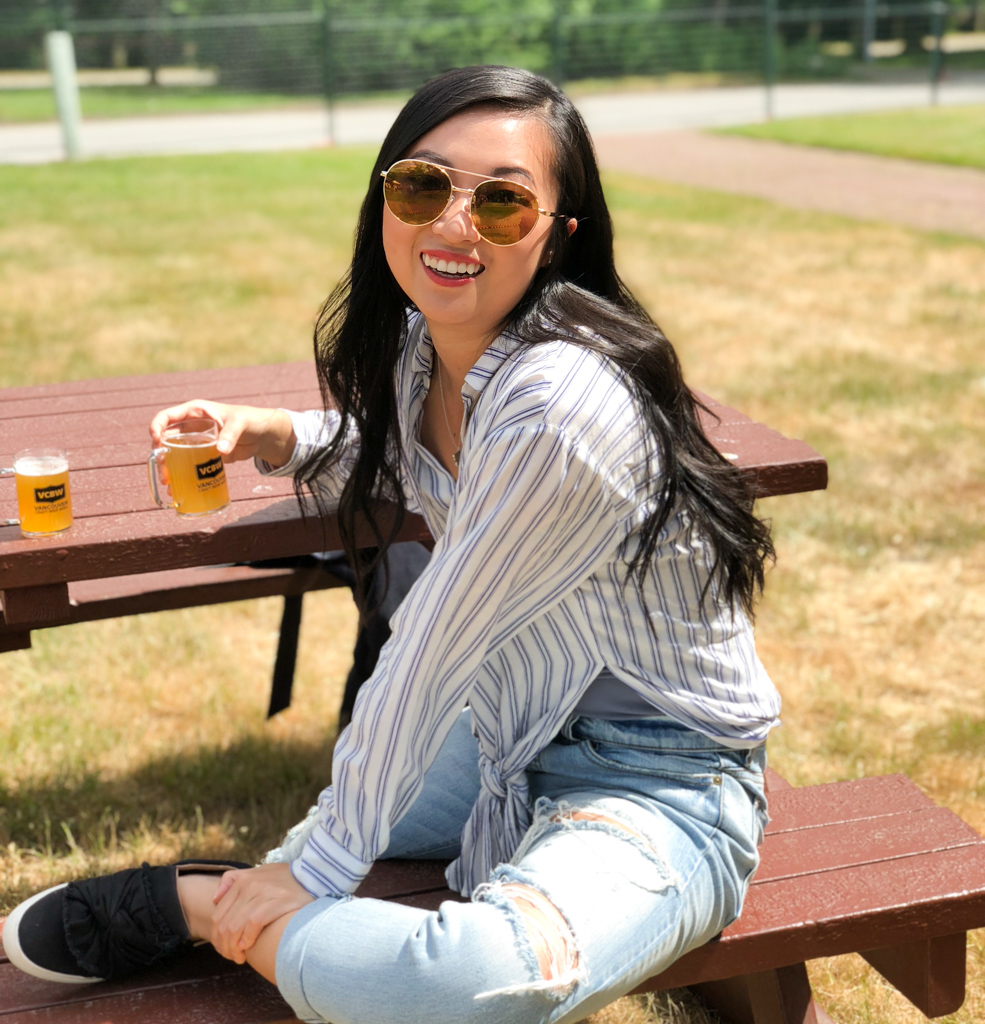 Vancouver is a foodie’s dream. There are restaurants, food trucks and pop up events for all cuisines and themes. Today I’ll be focusing on the best Food and Drink Festivals in Vancouver with an emphasis on the drink.  I included only events that I’ve personally been to so I can give you a better opinion! I picked these based on the overall experience also taking into consideration the value of the ticket! This post has really been almost a year in the making as the festivals mentioned span throughout the year! So if you enjoy good food, wine, and beers, you’ll want to book mark this page! 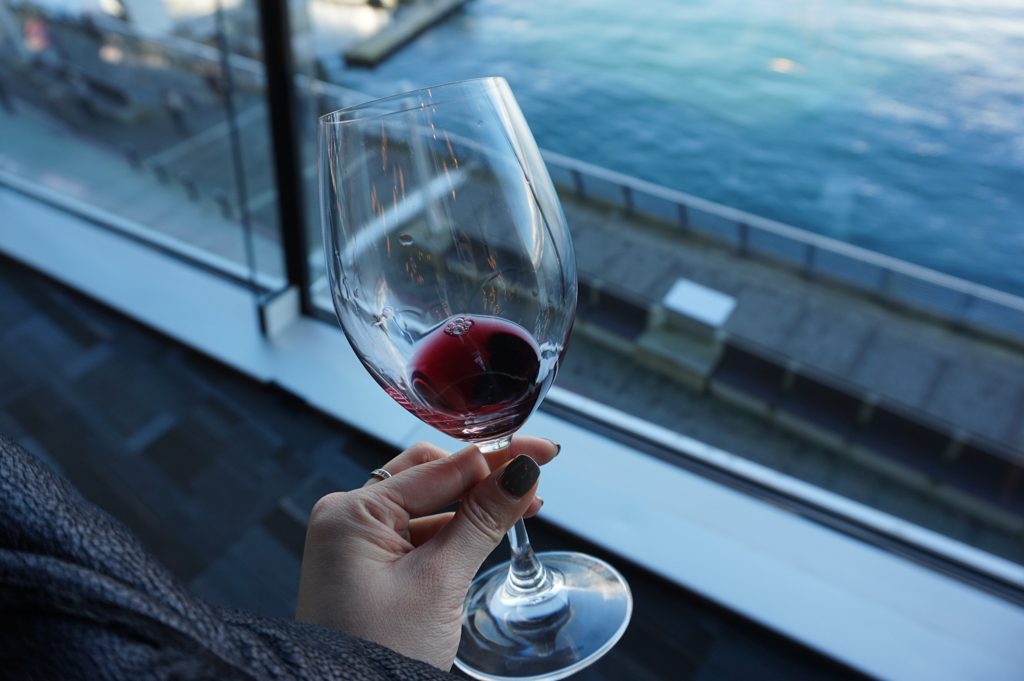 If you like drinking wine, this is a must attend event! The Vancouver International Wine Festival actually spans for over a week but the main event is the International Festival Tasting where you’ll have more wine than you thought possible. The 2018 region in focus was Portugal/Spain. Therefore, a majority of vendors were from the regions. However, there were still many vendors from the classic wine regions of Italy, France, Germany and also New Worlds such as Australia. I wrote a full post about my experience at the 2019 Vancouver International Wine Festival so make sure to check that out! 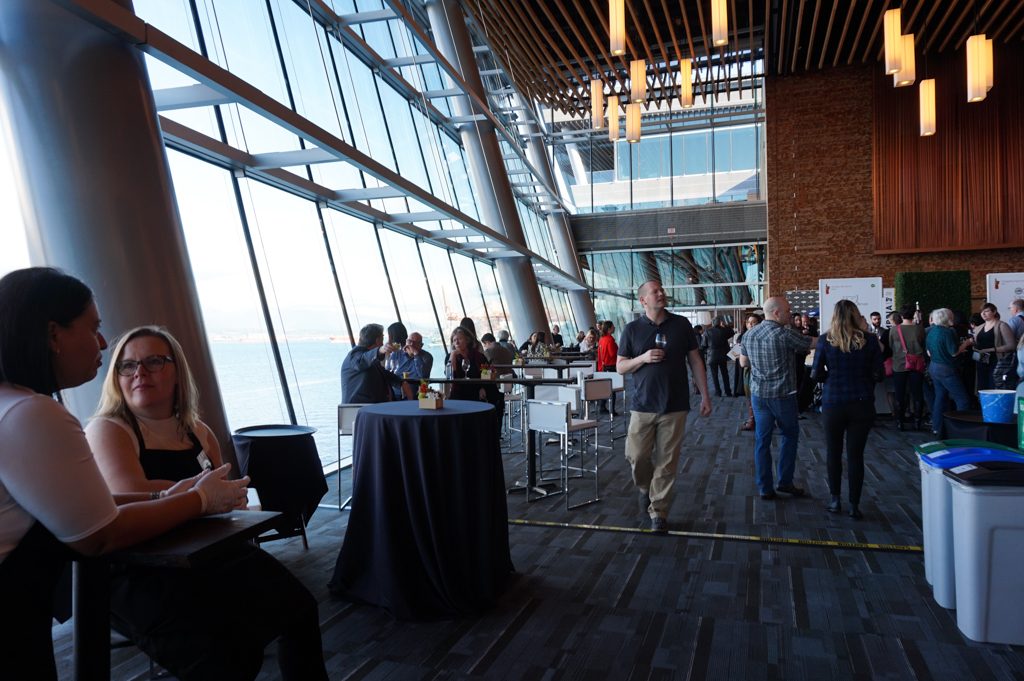 The ticket price is a high but once you get in, it’s a free for all tasting! You can get tasters at all of the vendors free of charge and I can bet that you won’t make it to all of them! In total, there were 750 different wines being poured in the Festival Tasting event!  Definitely plan for a safe ride home as you’ll be having tons to drink! This year, the festival provided a free compass pass ticket as you left the event! 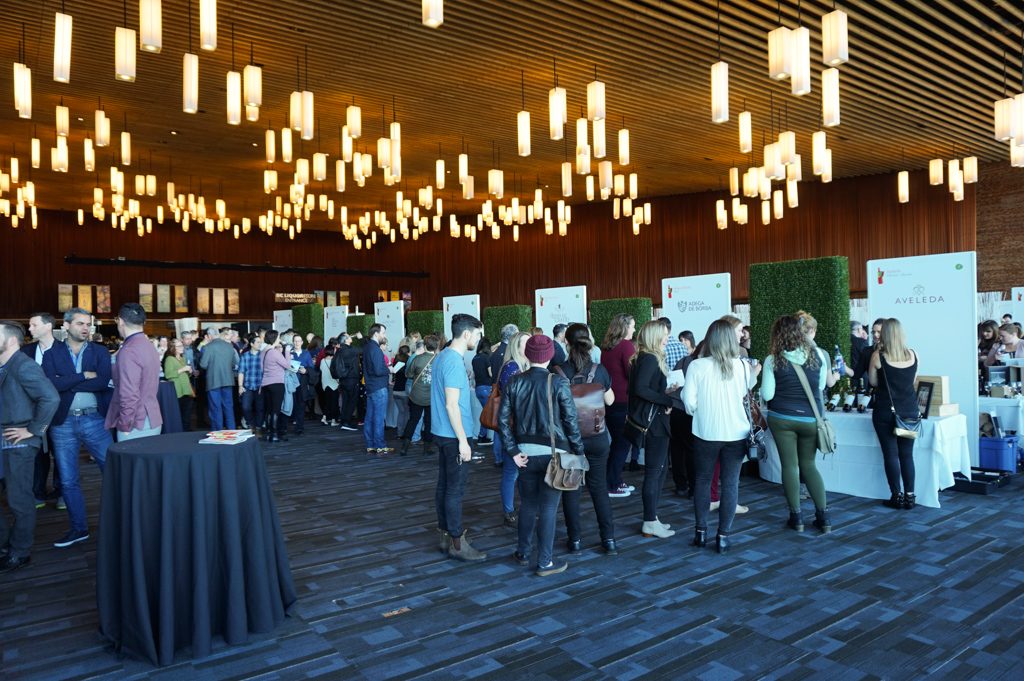 The location is in the Vancouver Convention Center with a room the size of the Aritzia Warehouse Sales. There were four different sessions being sold each lasting for about 3 hours. Each winery had 2-5 wines available for tasting. There wasn’t much of a line up at any of the vendors except for a few! If you are a real wine connoisseur, the festival also has an amazing collection of seminars throughout the week.

A really unique feature I loved about the festival was the BC Liquor Store inside the event. They offered awesome complimentary services such as free bottle check and wine delivery. If you tasted a wine that you loved, you can buy it right away but leave it on their shelves so you can go back to tasting. Also if you took transit and don’t want to bring a case of wine home, they offer free delivery to BCLDB locations. Some of the wines stocked at the festival are not available at BCLDB normally so I went for those ones. Also there are bottles that’s been signed by the winemaker which would make an amazing gift. 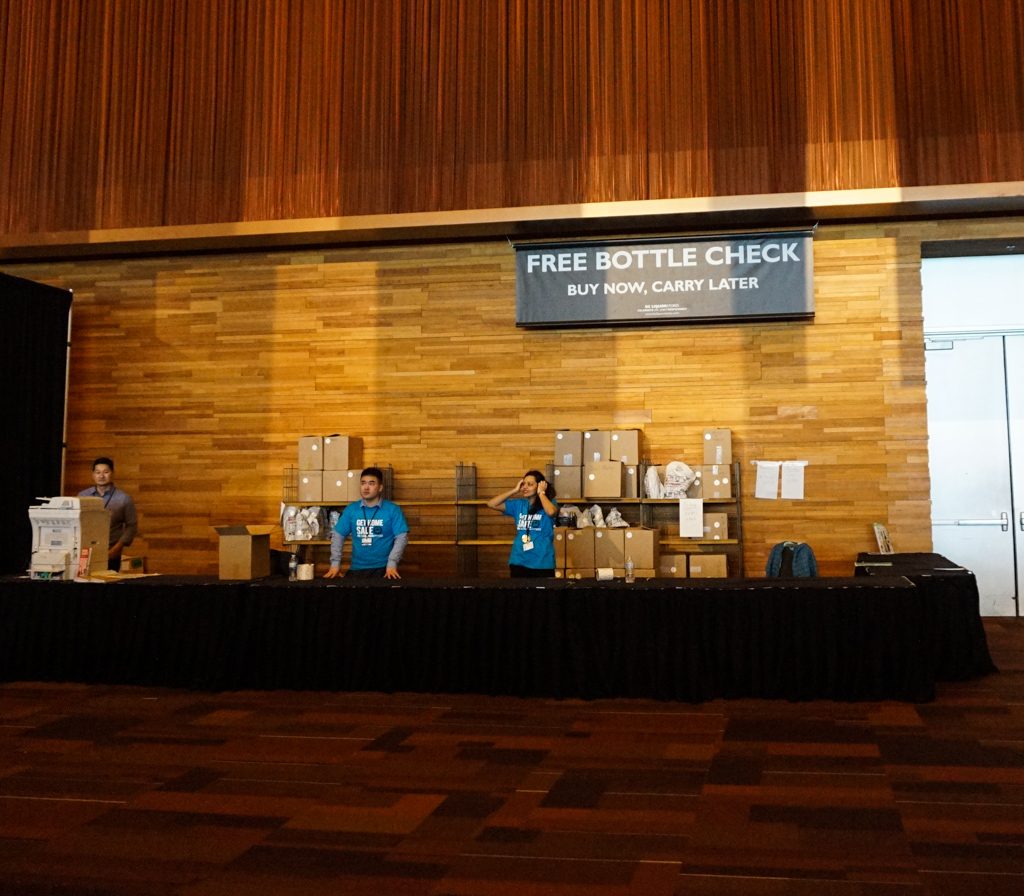 To get a jumpstart on summer, BC Craft Beer Week has the event for you! The main festival runs for two days at the PNE Fairgrounds and features over 100 craft breweries and cideries. However, unlike most of the other events I will mention, the ticket does not include drinks! Each drink sample is 1 token and you buy tokens for $2 each at the festival. You can also splurge for the VIP $75 ticket which includes 10 drink Tokens ($20 value) and a food voucher. 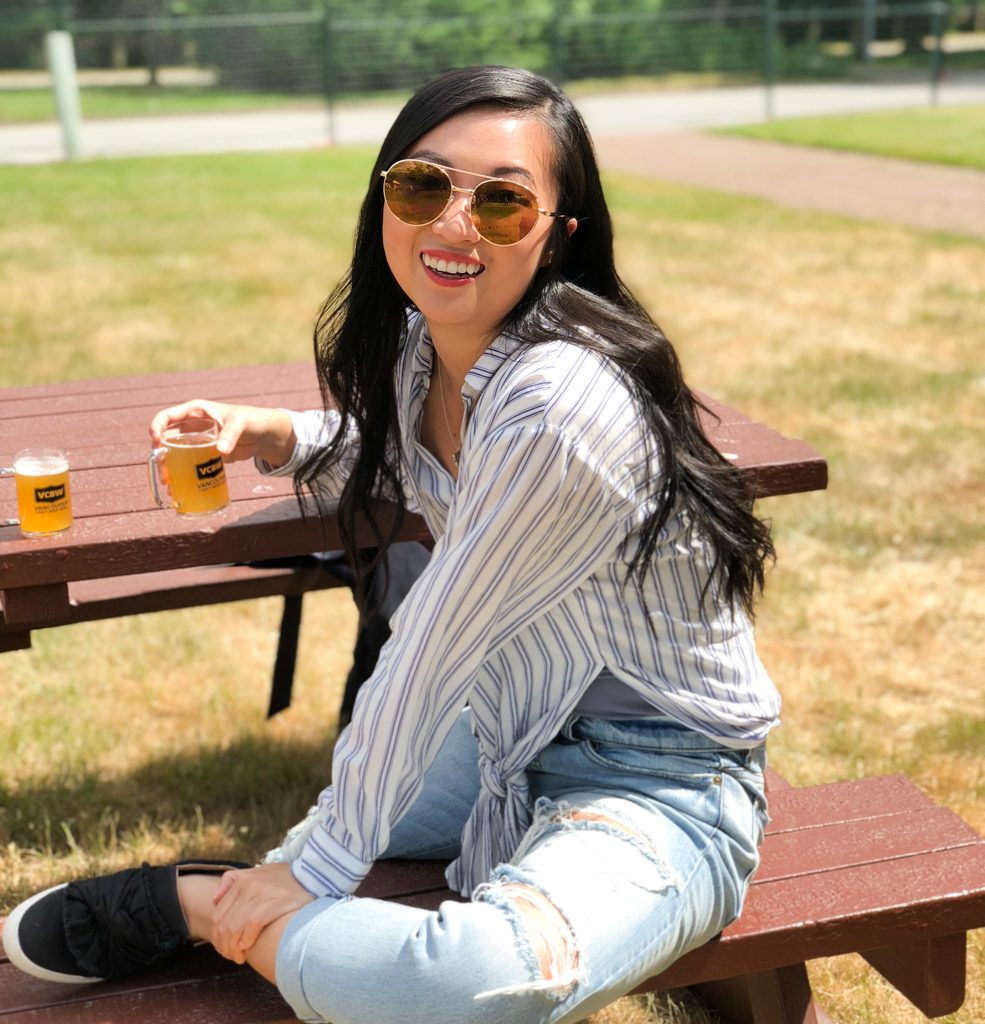 This event is the epitome of summer. I loved being outside in the sun with the venue filled with music. The event is crazy popular and line ups to get in started 30 minutes before the start time. What I really enjoyed about the event was that it was spread out over a large area with lots of picnic table for seating. Although you sometimes have to wait a minute or to for specific breweries, it never felt super crowded! 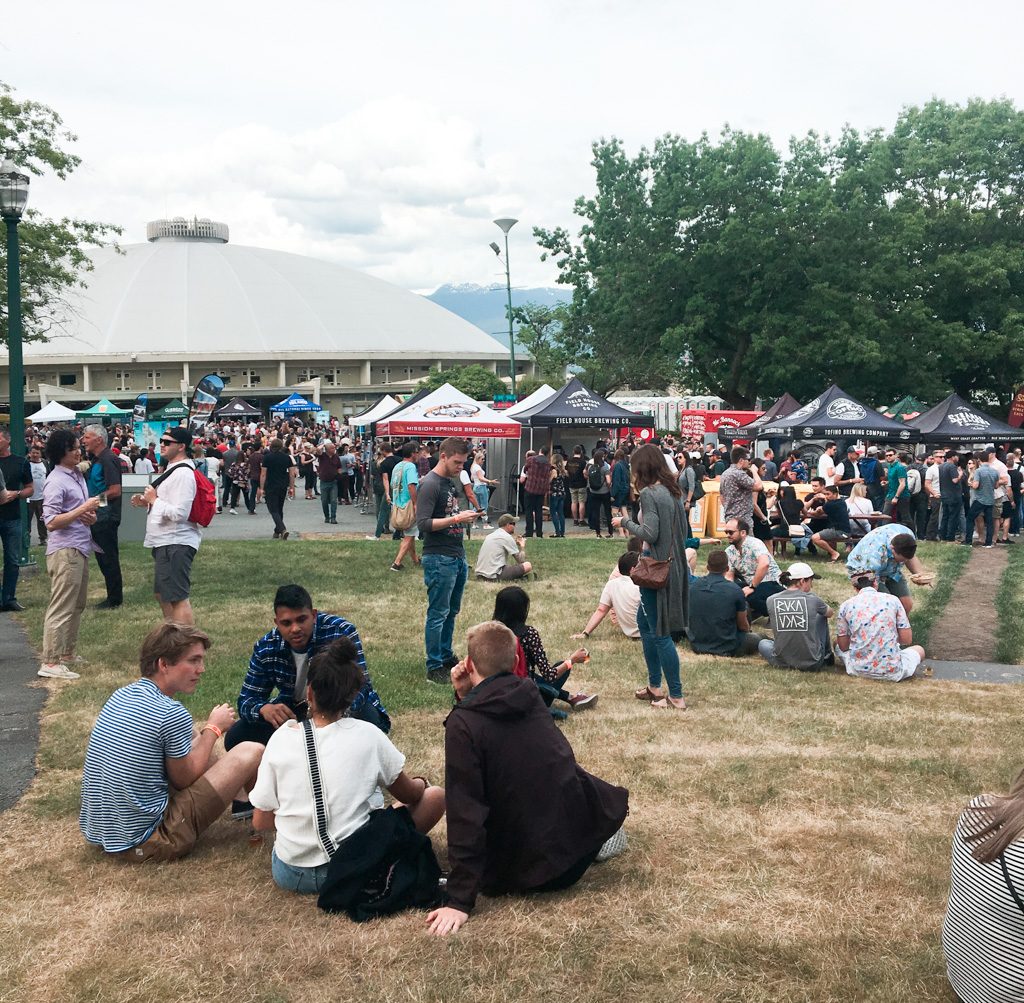 My favorite brewery in Vancouver is Four Winds out in Delta. I also like to do craft brewery crawls around the Main Street area. However, it’s hard to get out further and this event is the perfect opportunity to try everything all together. There are also a few breweries with the American Brewer Association and it’s an awesome way to try out craft beers from regions you probably won’t get to visit. The Vancouver Craft Beer Week is the United States Brewers Association’s exclusive Canadian festival partner! I definitely spent quite a few tokens in that area as I knew I wouldn’t get to try those beers anywhere else! 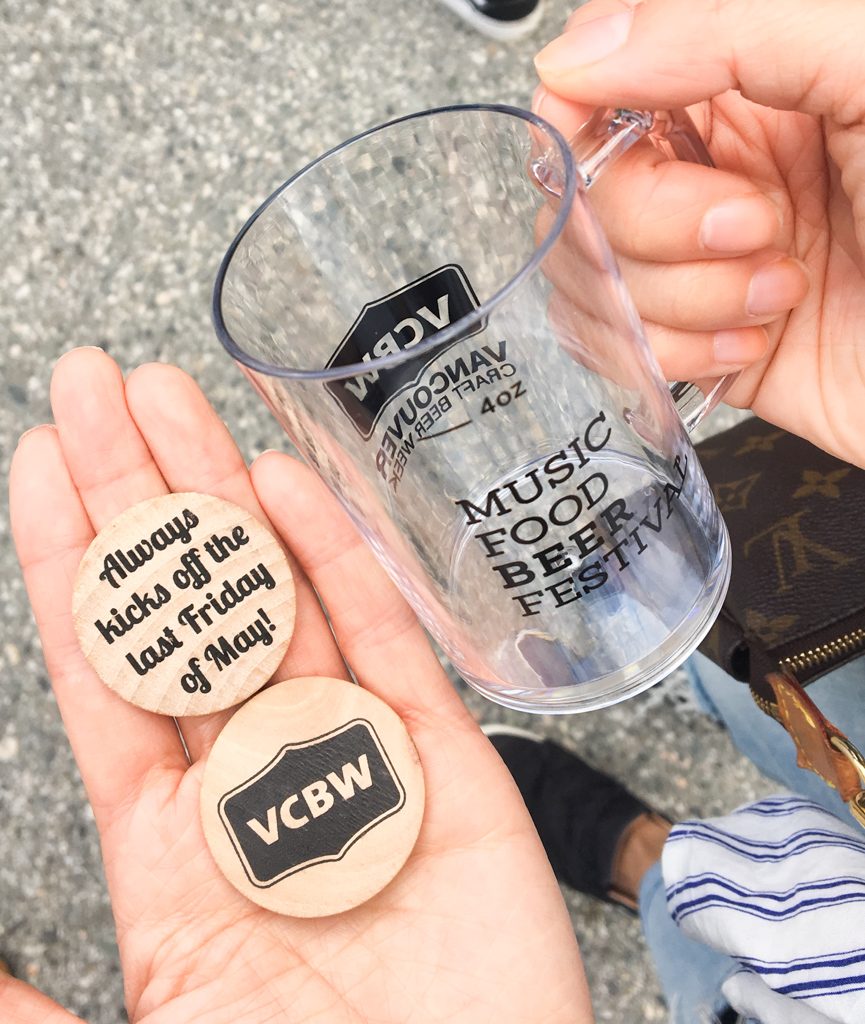 If you are not a beer drinker, there were a few cider options as well. Additionally you can buy food from food trucks or play lawn games set up by the organizers. Overall it had an awesome “fair” feel and it was really laid back.

Do you like charcuterie? In the Vancouver Cheese and Meat Festival, you get the chance to have unlimited samples of cheese, meat, pickled accompaniments, wine, beer, spirits, and cider! The festival only runs one day a year (this is their third year) and there is an afternoon session and an evening session. Tickets went on sale May 1st and has already sold really well. If you go to this event, make sure to show up BEFORE the session starts. There WILL be a line up and you will regret it if you show up late. 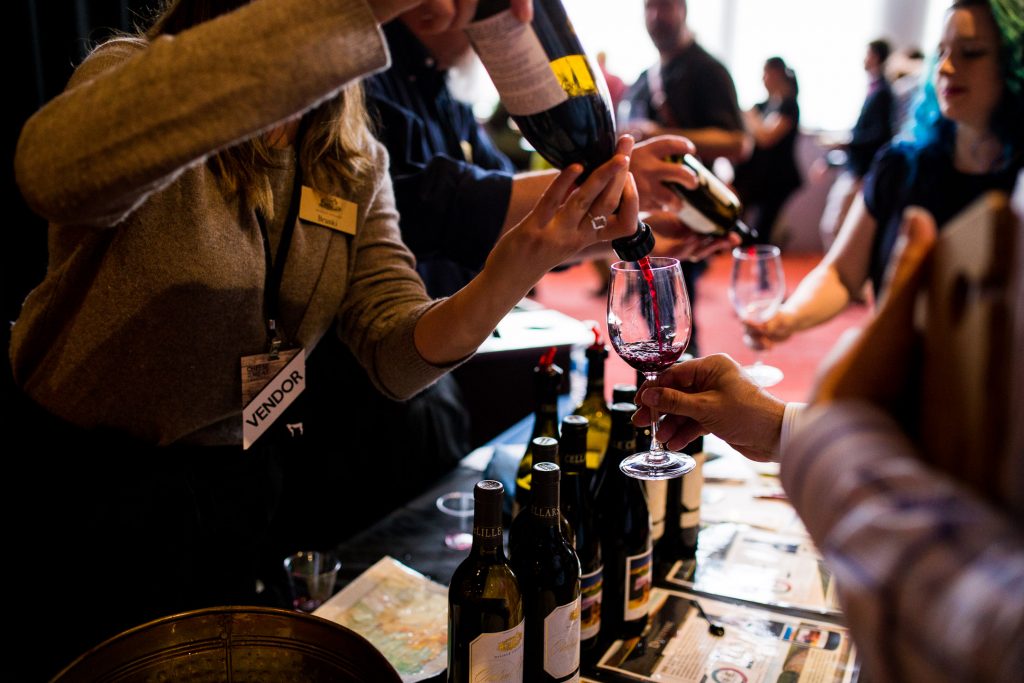 When you get in, you are given a small wooden board and a glass of wine. The set up was so cute but if you are also trying to take photos, you’re going to run out of hands. My suggestion is to grab a bunch of samples on your board, get a glass of wine, and find a table to chow down. Then repeat. There was never any issues about going back for seconds at any vendors. There were 47 vendors last year and I’m sure there will be even more this year! 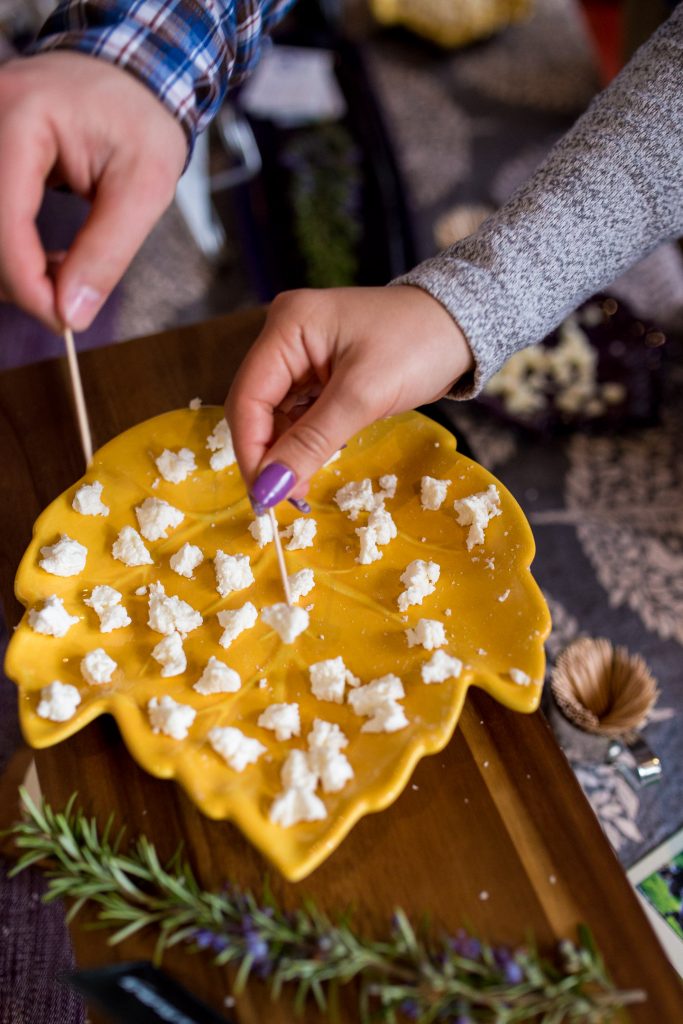 Although it doesn’t look like too much cheese or meat on my wood board in the photo, I was stuffed by the end of the event! Oyama from Granville Island was my favorite vendor. They had 3 different types of charcuterie meat and was super generous with the portions. 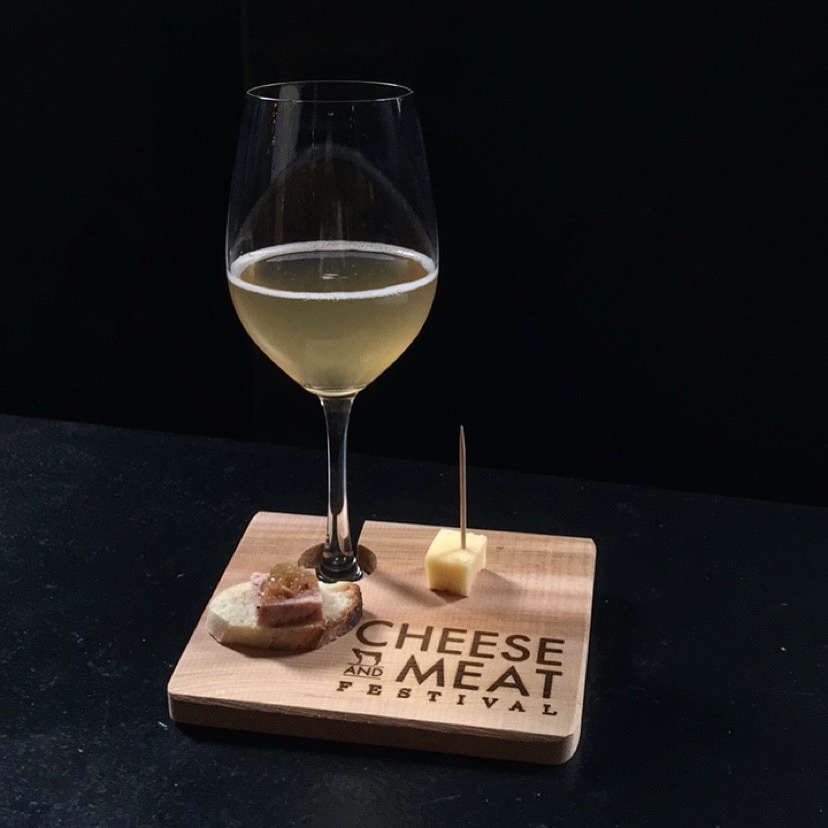 There are a few options to celebrate Oktoberfest in Vancouver. But my favorite is Harvest Haus hosted by the Social Concierge. This multi-week event used to be held at the Queen Elizabeth theater but transferred to the open space near Rogers Arena last year. I love the effort the organizers put in to create an “authentic” Oktoberfest experience including music and entertainment! 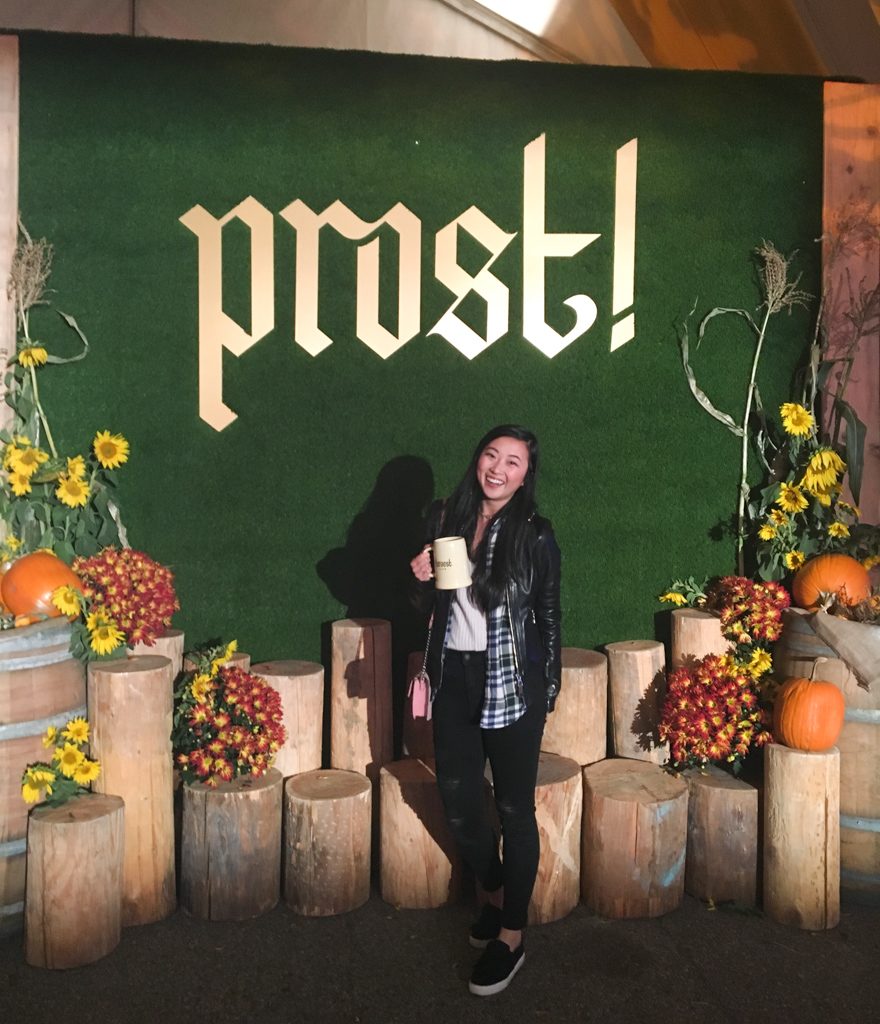 The ticket price only gives you access to the event. Once inside, beers are available for purchase. It averages around $10 for a pint of beer which is slightly expensive. However, a lot of the pours are from Germany and not normally available in Vancouver so it makes it worth it. 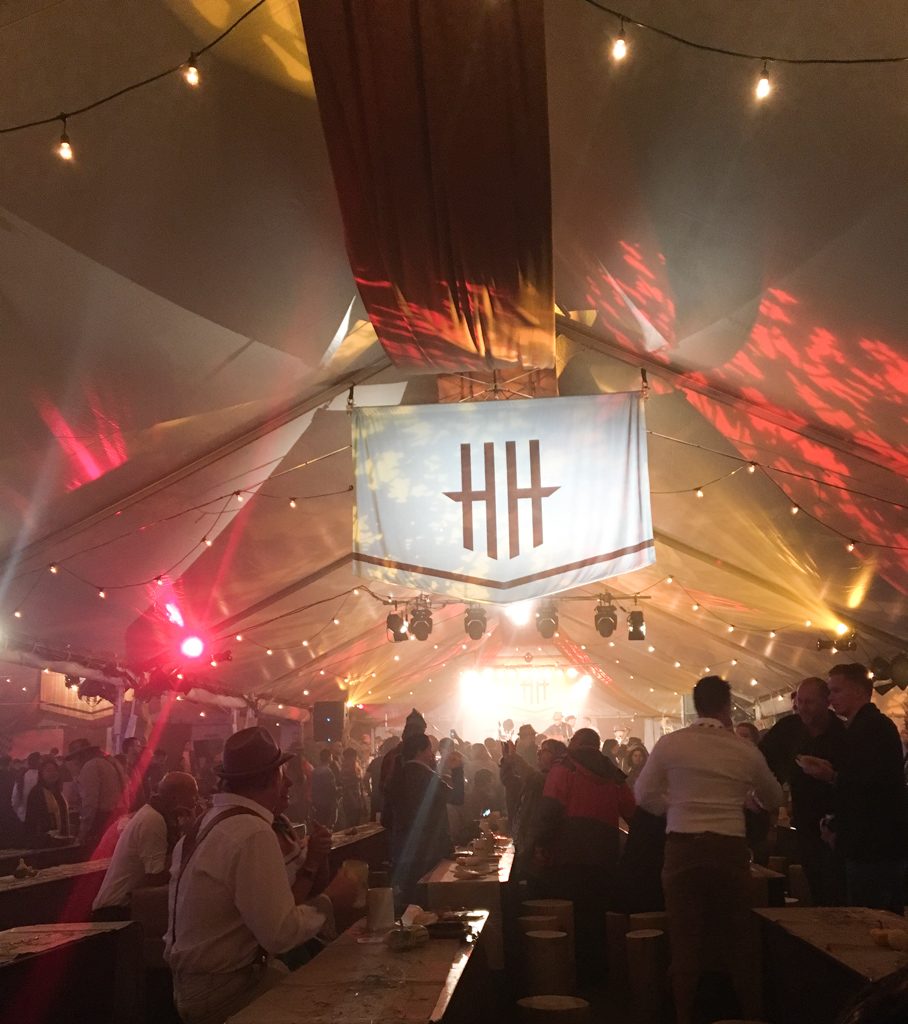 There are performers as well as music playing the whole night. Some people get up to dance but it doesn’t turn into a big “club”. The seating inside is picnic table style but most of them are reserved for “VIP” or table captains (if you buy in group of 10 for example). If you go early enough, you can easily take a seat anywhere but once people show up, it can be difficult to find seating. It is not as good value as some of the other options on the list but it’s still a great one for celebrating Oktoberfest! 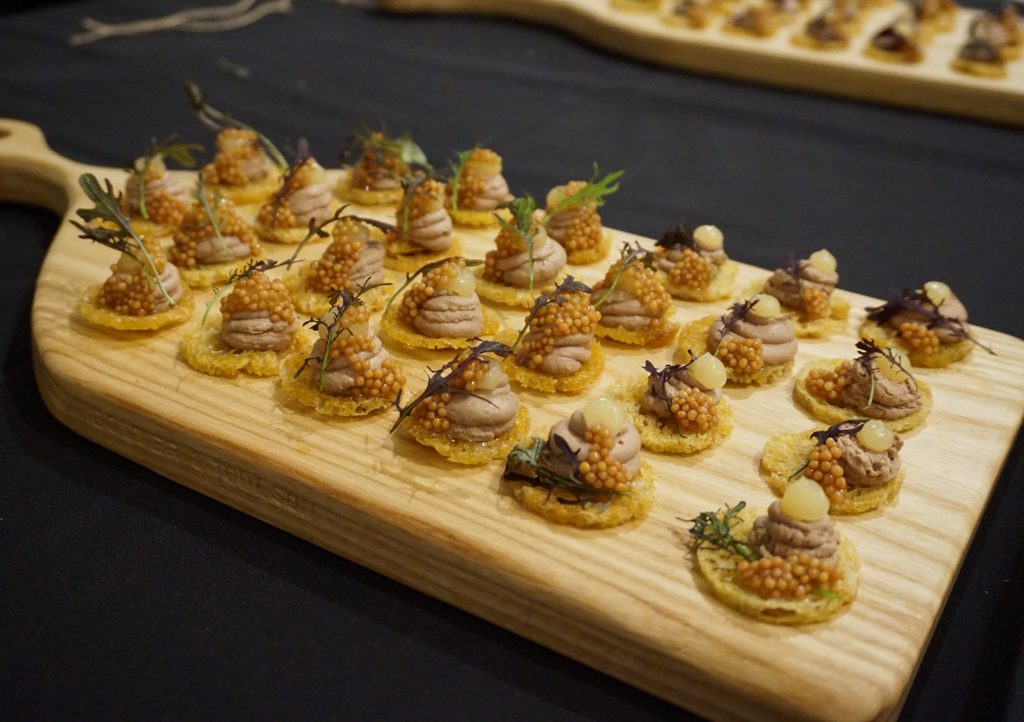 If you like dining out in Vancouver’s fancy restaurant, this is the event for you! The Eat! Harvest festival brought together 18 chefs from around Canada to create bite sized culinary greatness. Some of my favorite dishes last year were the Mussel and Coconut Soup from Maenam, and the Coconut Scallop Ceviche from Chicha. Some notable chefs include those at deer+almond, Canis, and Wolf in the Fog for restaurants outside of Vancouver. 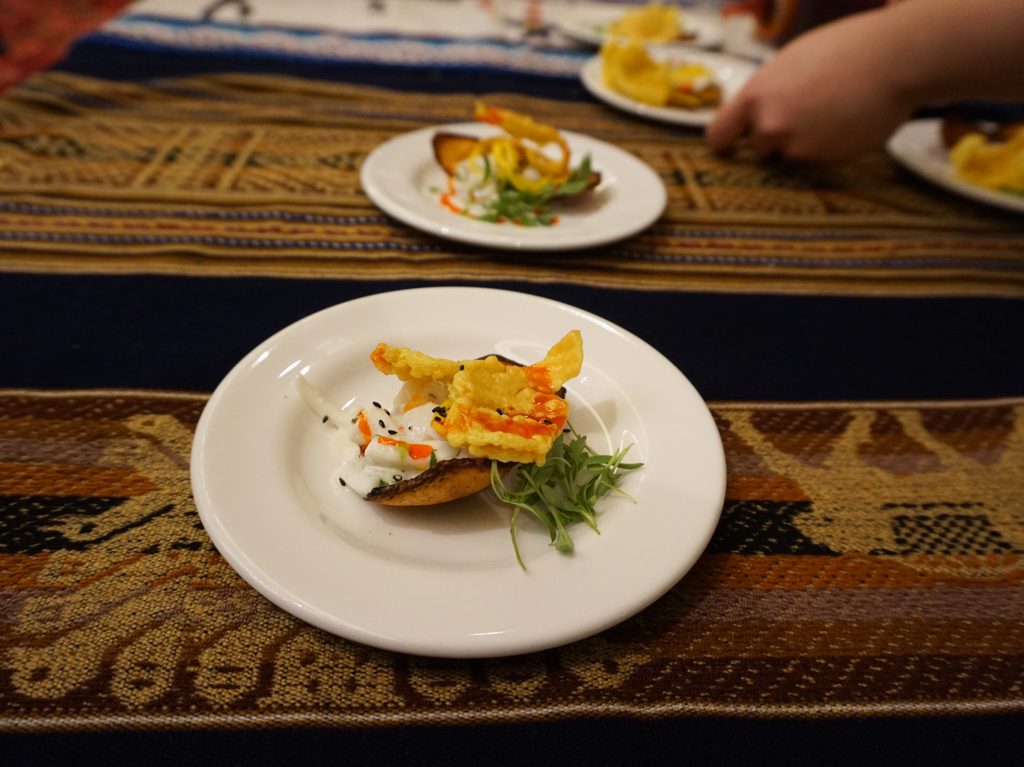 At each station, there were samples being laid out for the taking. Since most of the samples were assembled on the spot, there were notable line ups at certain stations. To avoid this, go early and also don’t coat check! Hold on to your coat for a while until the coat check line dies down. This way you don’t have to wait for samples nor coat check. 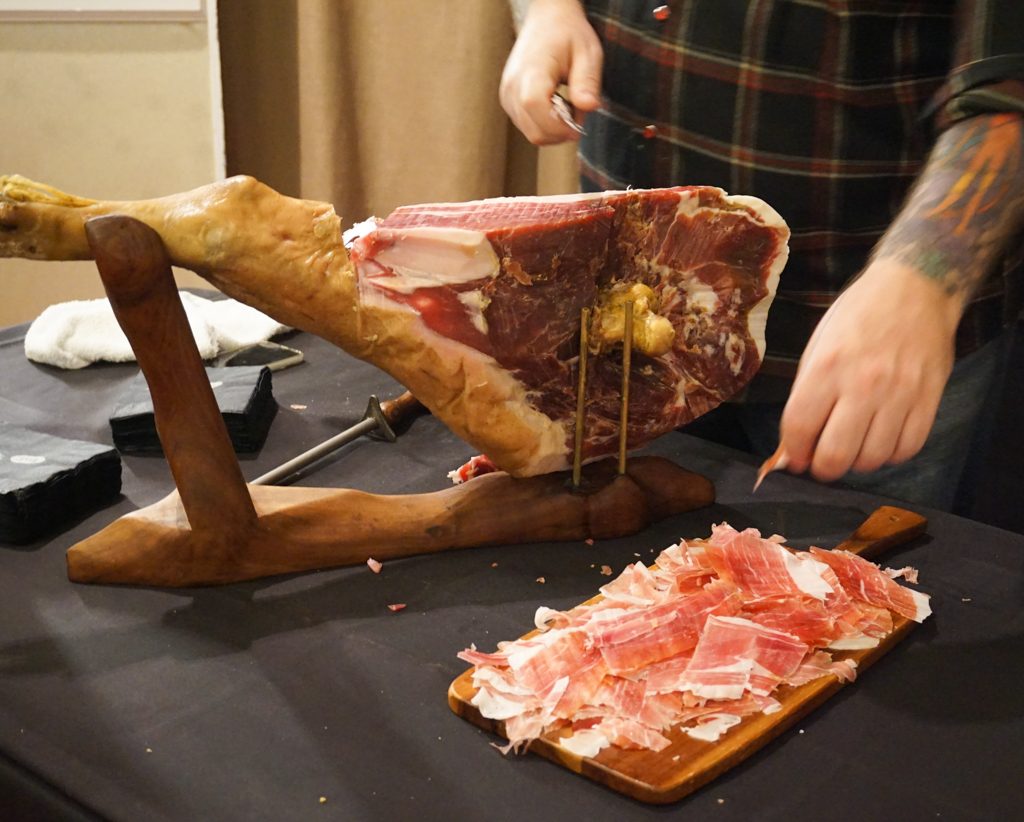 There are plenty of food around but there’s drinks as well! The wines being poured out are a bit more premium and last year’s theme was California wines. The tickets are more expensive for this event but they brought in tons of high caliber chefs and is an awesome event for foodies. If you are more into desserts, there’s a EAT! Pastry event usually the next day. 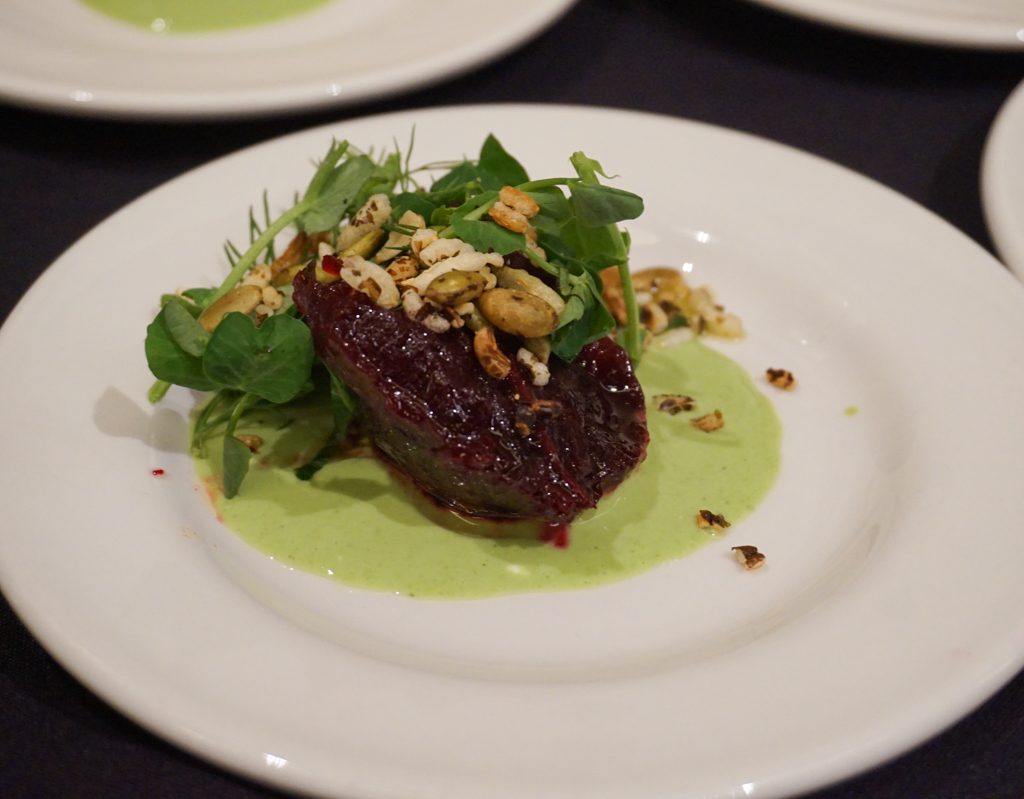 While Dine Out is the signature food event in Vancouver, I have been disappointed by the menus in recent years. The events mentioned in the post are some of the best food and drink festivals in Vancouver. It gives you the opportunity to try out new vendors and push the boundaries of your taste buds. It’s also a good excuse to get together with friends or meet strangers with a common interest. I really enjoyed going to all of these and will make it a goal to attend all again next year!

Don’t miss my other food posts like Desserts in LA or Cheap Eats in Tokyo! If you’re not much of an alcohol drinker, make sure to check out my favorite places to buy loose leaf tea in Vancouver.