A couple weekends ago, I visited Portland and had an afternoon to myself before traveling for work. I decided to do something new by joining a downtown Portland food tour! Portland has such a unique history with food carts and I wanted to learn more about local spots and also the city’s history. Eat Adventures has 4 different tour options and I chose the Deluxe Downtown Foodie Experience Tour. I was also really interested in the Food Carts & Neighborhood Tour but since I was only free on Sunday there’s not that many food carts that are open!

In the Deluxe Downtown Foodie Experience, our tour group hit up a total of 6 spots in about 3 hours and I was left with a full belly and lots of new knowledge! The tour costs $89 and all the food samples and drink samples are included! I’ll share with you the restaurants we hit up and what type of food samples we got to try.

The tour started at 2pm in the Headwaters restaurant which is actually part of the Heathman Hotel. I don’t normally like to eat at restaurants in hotels, but this one was beautifully decorated and actually had a good value menu. To start things off, the tour guide showed us a map of Downtown Portland and the general direction of our tour. I got to enjoy a Peter Allen pilsner to start off the tour since Portland is such a beer city! The food sample we got was a sturgeon with herring schmear. You would think it’s very fishy but it’s actually quite neutral, creamy and pairs very well with the light chip we were given. 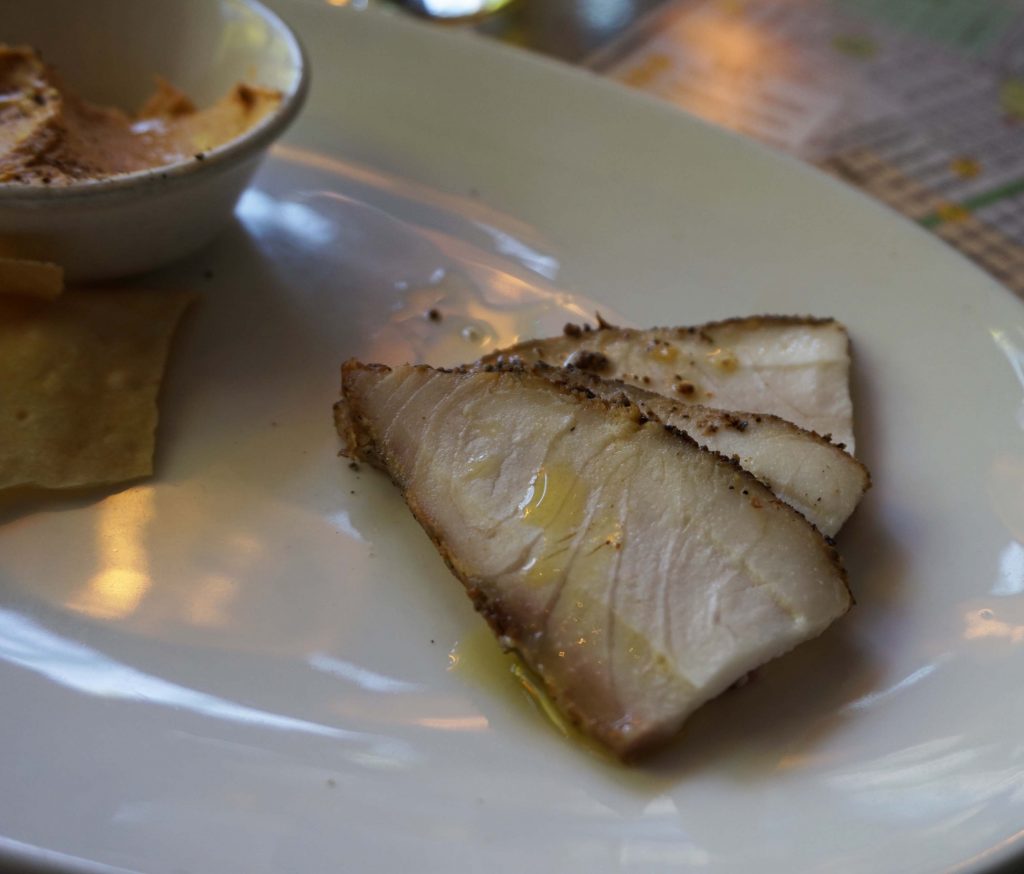 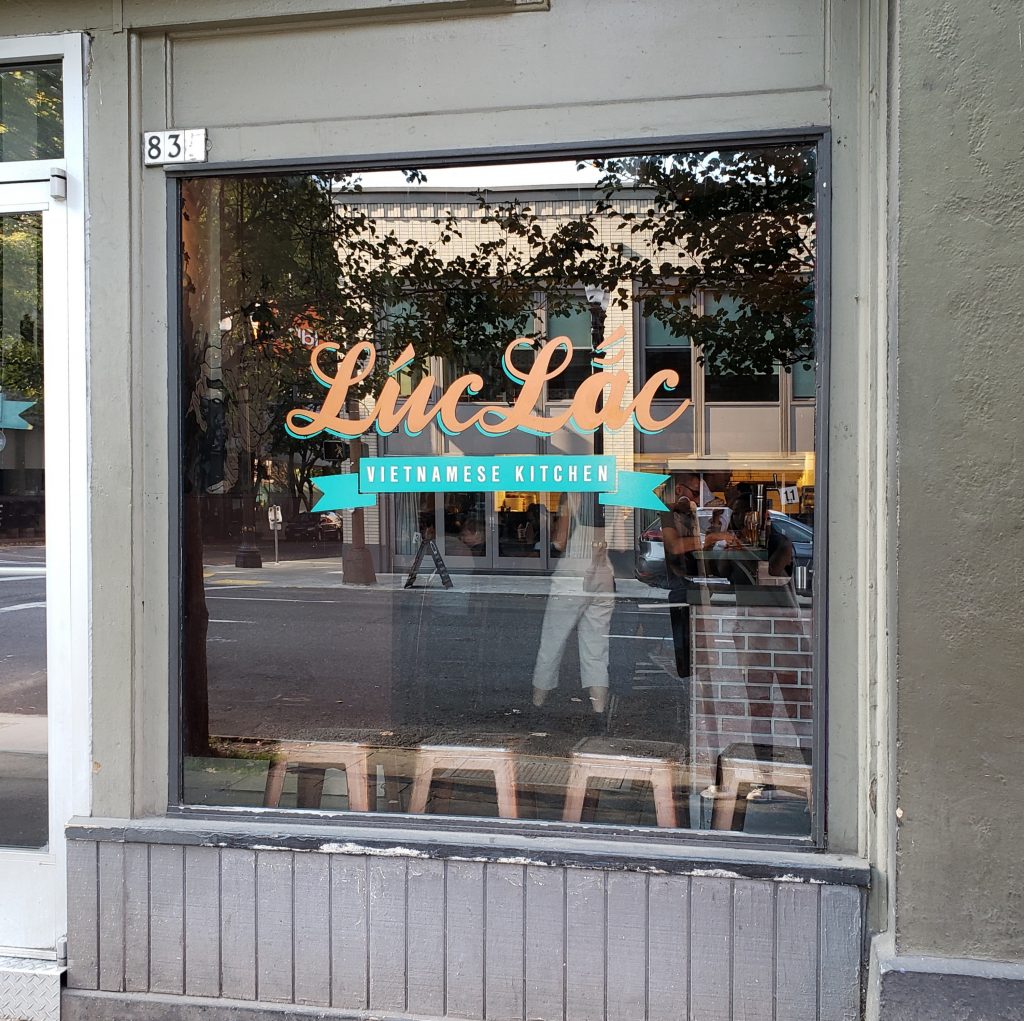 This restaurant was on the top of my list of places to try and is a very popular spot in Portland. The tour takes you here when Luc Lac is actually closed for a break between lunch and dinner but luckily there are picnic benches outside. We had the sugar cane shrimp, and chicken wings. Both were so good and I’d definitely come back to Luc Lac on my own! Our guide also told us to suck on the sugar cane to get more sweet juices! I would have just tossed it if I didn’t know! 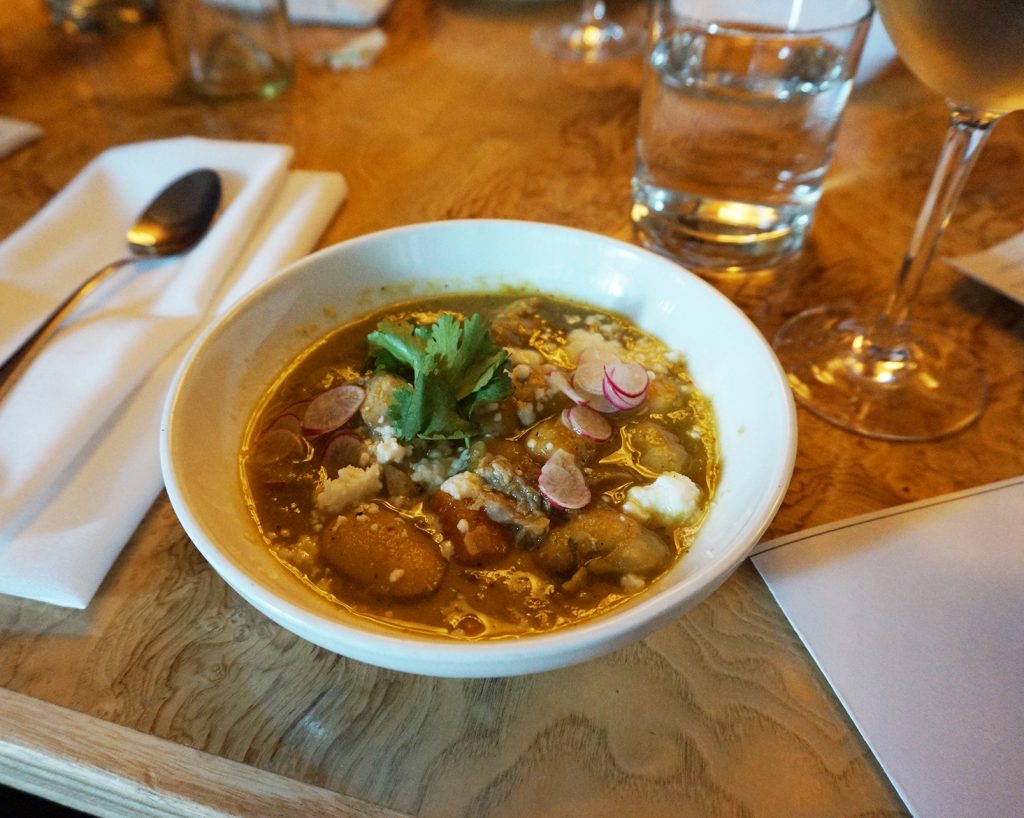 Q Restaurant has a long history in Portland but this location at 2nd and Taylor is new. The decor and menu is a traditional fine dining restaurant but with a focus on local ingredients. Again, the restaurant was actually closed between lunch and dinner. But this time, our group was seated along a sofa by the kitchen. We were given a glass of wine and a special creation by one of their sous chefs. To be honest, I didn’t like the food sample at this restaurant. It was a Mexican inspired soup but it felt a bit too homey and there wasn’t anything innovative with it. Also I wasn’t a fan of the large beans that was the main ingredient of the soup. 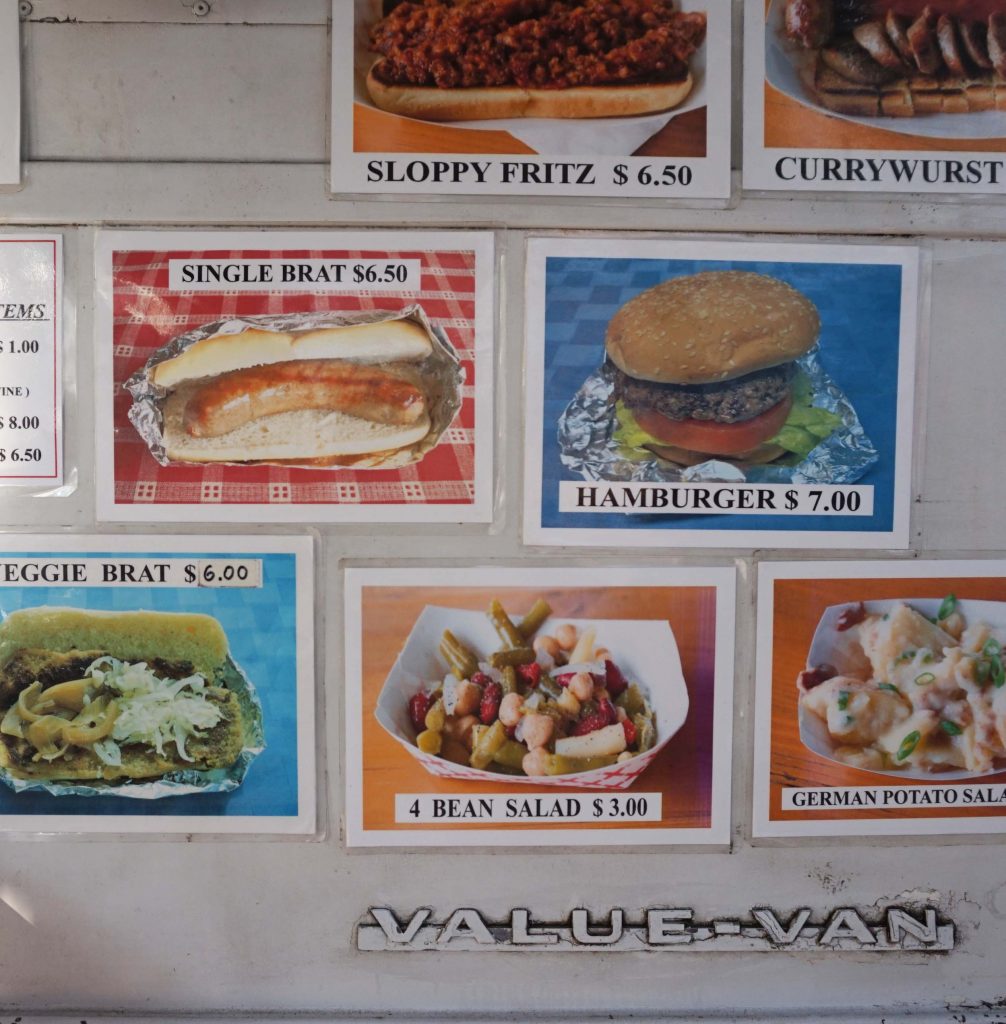 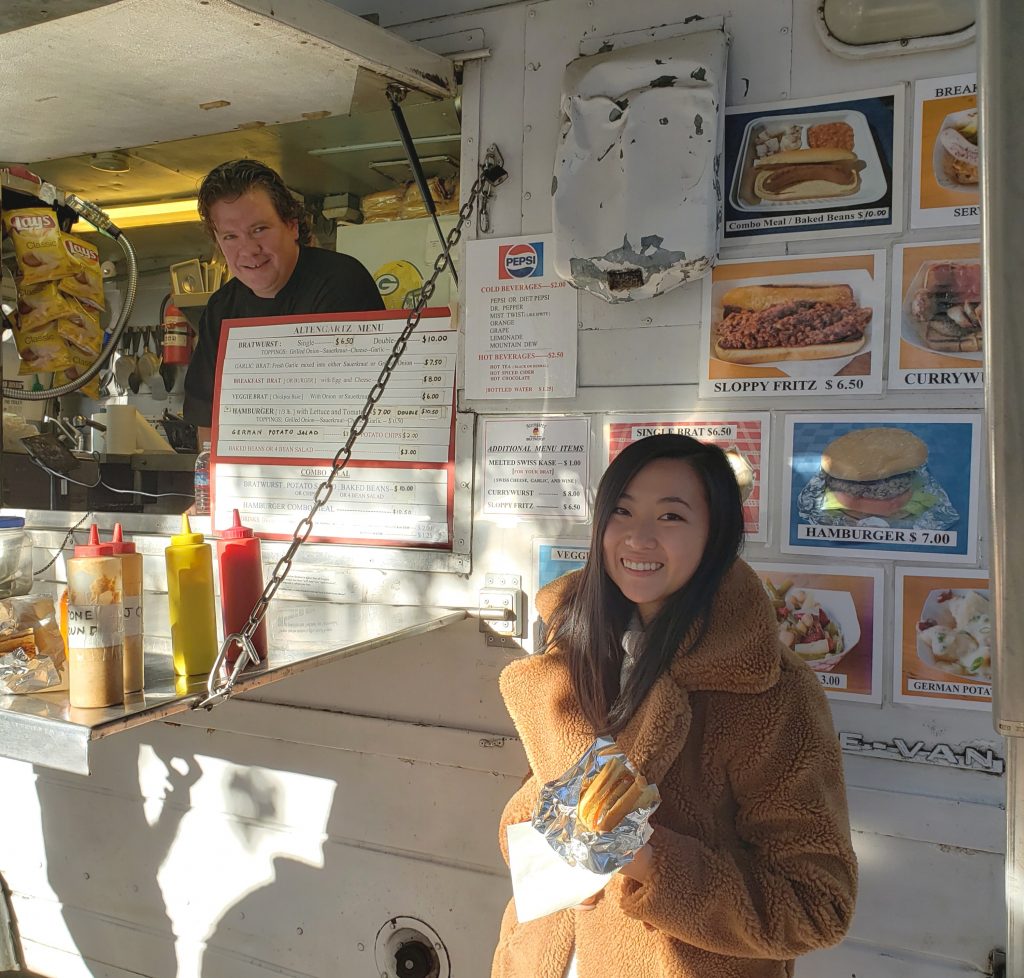 Food carts are super popular in Portland and you can find them in pods around the downtown area. They are actually not food trucks as they do not drive around and the spots are usually rented on a more long term basis. I’m glad that even though this tour focuses on the nicer restaurants of downtown that we still visited a food cart. There’s probably other food carts I wanted to try but it was Sunday and options are limited. Altengartz has been in operations since 2000 making it one of the oldest food carts! We had a half of a bratswurst and it was definitely very good and definitely the eptiome of food carts. Focusing on one dish you cook really well and being able to serve it at a low price! 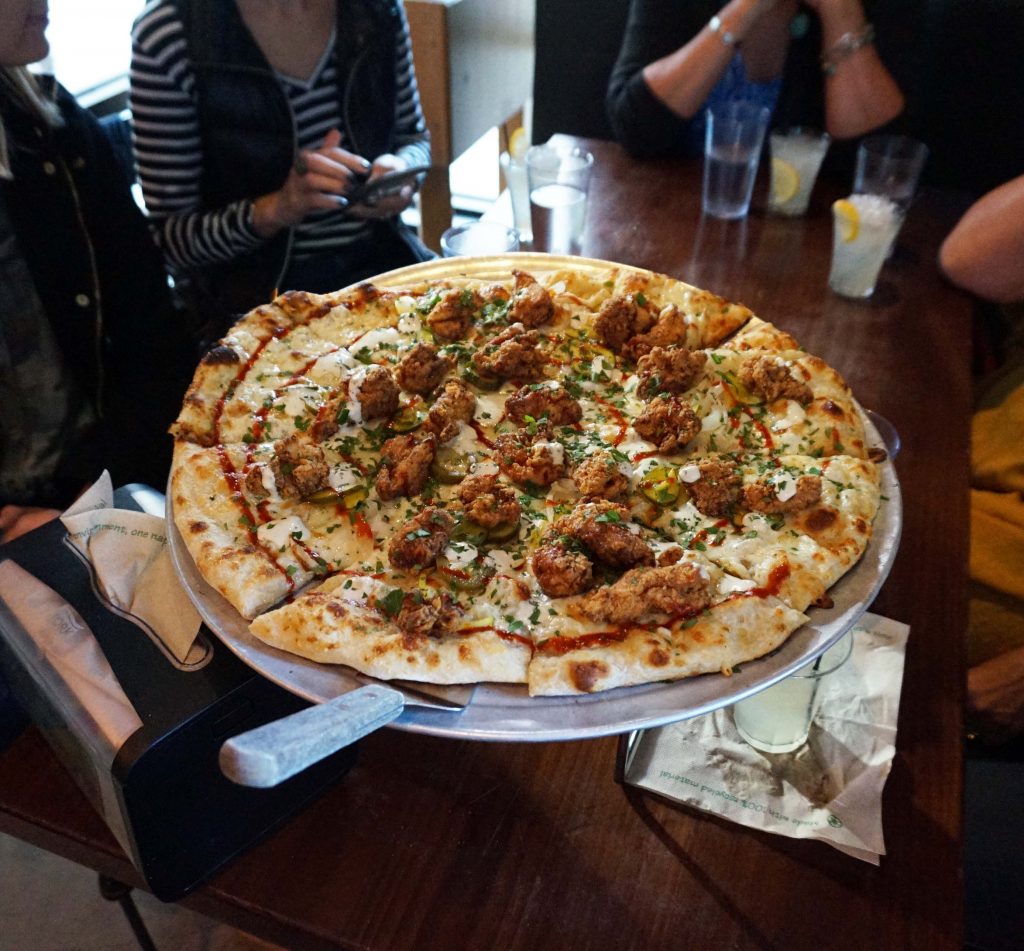 For a fun stop, we went to the Crown which is the restaurant of Hotel Lucia. Again, I’m not a huge fan of hotel restaurants so I had a bit of a bias walking into it. We got to have a margarita which was very refreshing. Then, I found out we were having pizza! I was already pretty full by now and the pizza was a fully loaded one with fried chicken on top. It was actually a pretty delicious pizza and very unique because it had honey and pickles! But I was hoping for something more refined and light especially after we just had a bratswurst. 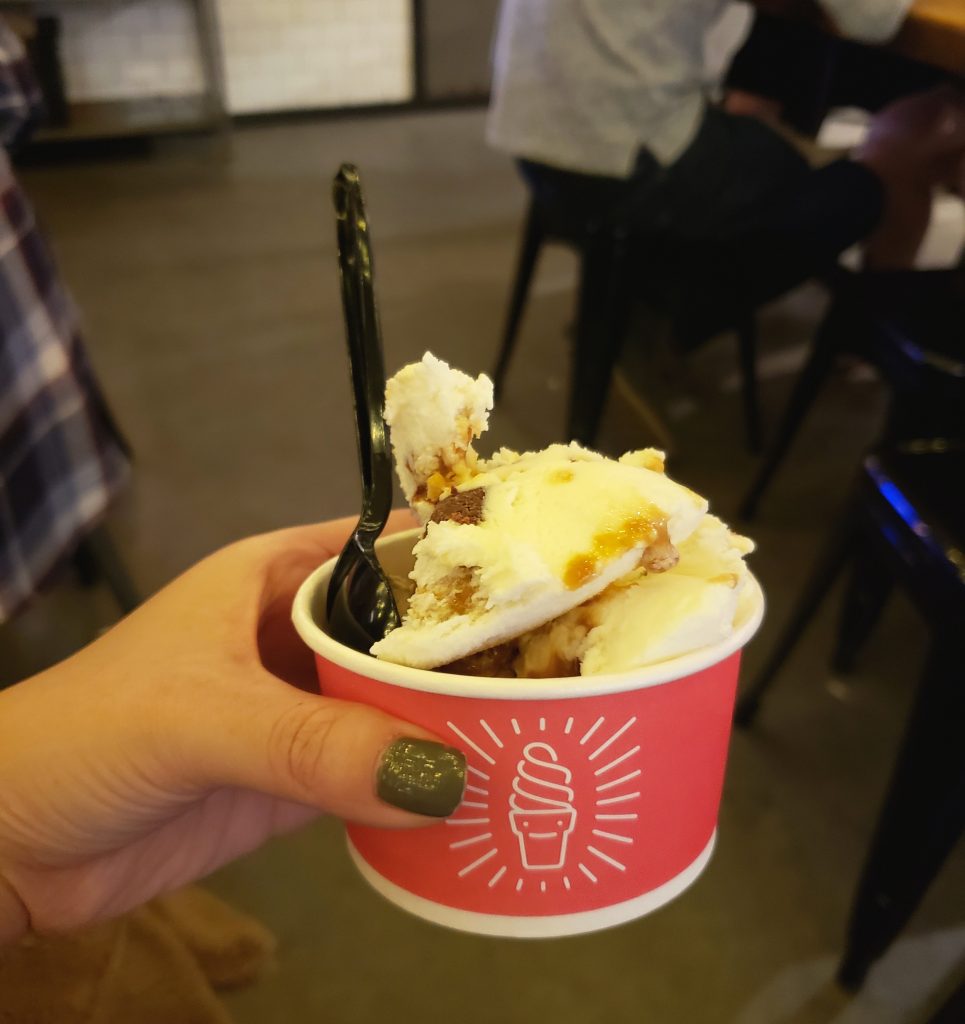 Last but not least is dessert. The group shared 2 pints of Salt & Straw icecream. If you have not tried Salt & Straw ice cream, you are missing out! On that morning, I actually already had a full cone to myself. But don’t worry, I polished off this serving too. We got Salted Caramel and Wood Fudge Chocolate which can easily appeal to a wide variety of audiences.

Throughout the trip, I learned so much about Portland both in terms of history and fun facts! For example, all new buildings have a public art tax. That’s why you see so many murals and sculptures on the sidewalks. Pictured below is our group walking Pioneer Square which is a popular spot for tourists. What I didn’t know though is that there is a hidden “circle” where the acoustics are set up so your voice gets echoed back very loudly.  I learned tons more interesting facts along the tour which makes me appreciate Portland even more!

I came on the tour myself and was joined by 6 other ladies. They were 2 different groups of friends but everyone was very friendly. Don’t worry if you’re male and are interested in the tour. Apparently the tour is actually more of a 50/50 especially since lots of couples do this tour together. I had a great time with Eat Adventures on their Downtown Portland food tour! Although each stop was just a sampling, there was more than enough food for everyone! There are a few stops that I wouldn’t have picked on my own but I think that’s the fun of the tour. 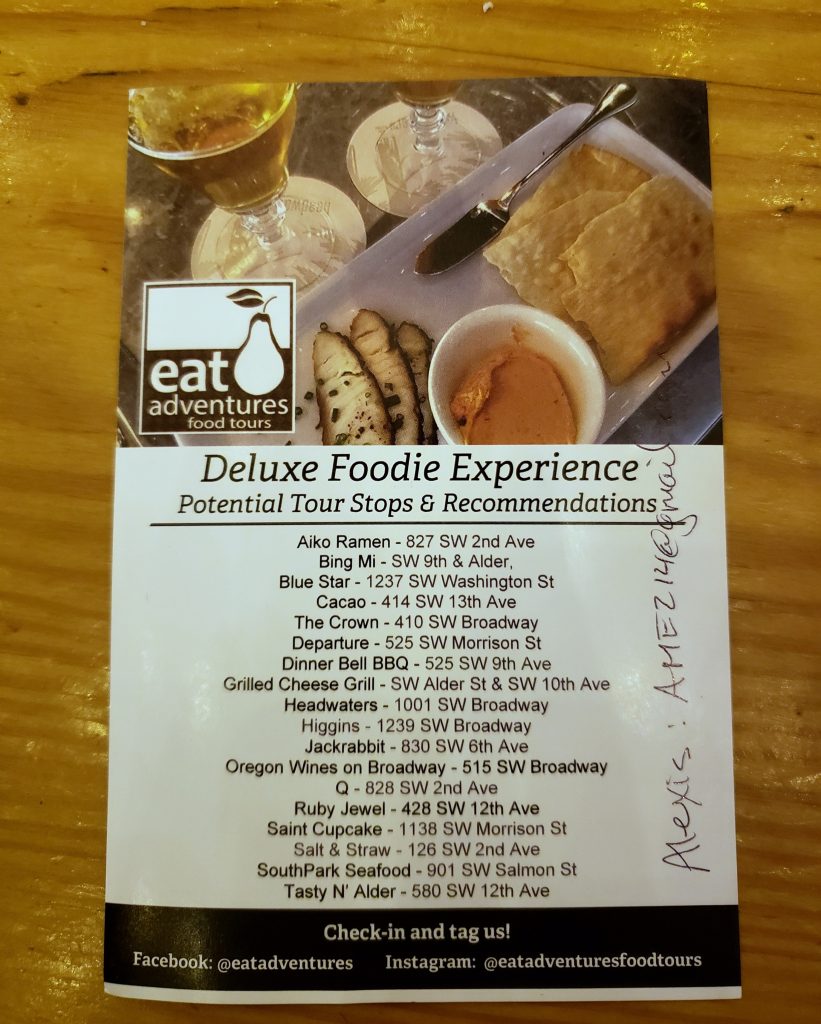 Big thanks to Eat Adventures for hosting me on this tour

Happy Monday!! Escape the rain and discover the fl

#ad I wear contacts daily and the worst thing is f

Start off your year on a wholesome note! 🥦 exci